Different: Session 6- Different When I Am Wronged 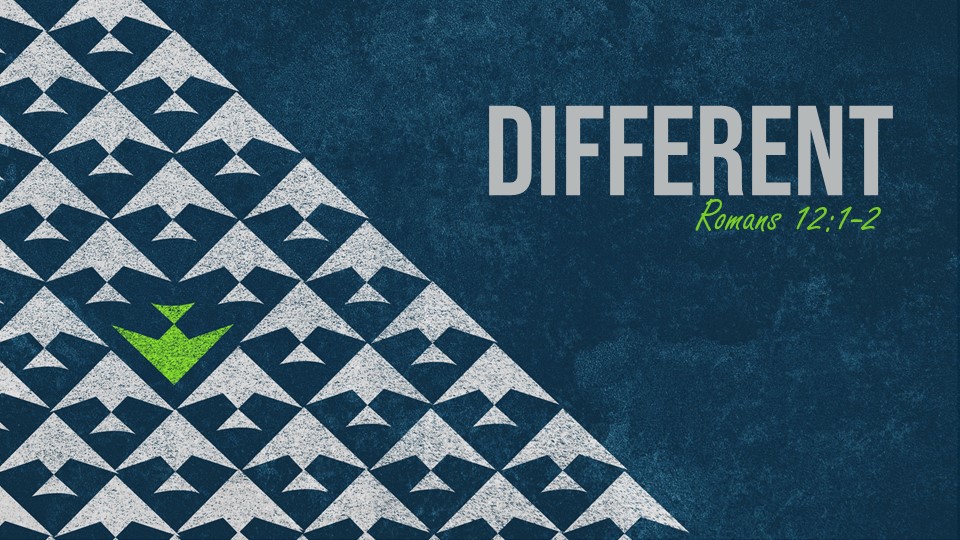 Different: Session 6- Different When I Am Wronged

Objective Statement:  We can respond differently to evil by adopting 3 responses.
Keyword:  Responses

Now we are done wrong in life routinely.
At times it may be much larger than a little bit of a wait in line…
As we talk about this series that we’ve called “Different”, one of the questions I want to raise tonight is this:
Should the way a Christian responds to being wronged (persecuted, maligned, mistreated, persecuted) be different than the rest of the worlds response?
Of course the resounding answer of scripture is YES!!!!
What is a typical response of someone when they’ve been wronged?

Romans 12 has taught us though that the Christian ought to live a different kind of life in every way.
As Paul has progressed through the chapter, He has taught us what it takes to be different, and how that God makes us different through the renewing of our minds.
Last week we talked about attitudes that we adopt regarding others, especially other believers.
In tonight’s text he moves toward talking to them about how to respond to people who are evil toward us.
He speaks to us about what to do when other people hate us. How do we respond to persecution, social ostracization and the like?
This subject- Responding to evil- was such an evergreen topic for the Roman church. In fact after Paul addresses this subject in tonights text, he immediately moves on to God’s view of the role of government, because the government itself was the source of so much of the evil treatment that they were experiencing.
What Paul explains here about evil is the basics of God’s view on how a person who is different responds to evil.

Recompense means to pay back.
The idea here is that the response that a person who is different has to someone who wrongs them should not be to return in kind.

If they hit, we do not hit back.
If they gossip, we do not gossip back.

The tendency of literally all of humanity is to return in kind what has been done to you.
Remember that this is under the heading of non-hypocritical love that is disgusted by evil.
The idea is that we are so disgusted by evil done to us, that to produce more evil back to other person is a detestable thought.
We hate what is evil, so when evil is done to us we do not give it back.

Provide things honest in the sight of all men.

As we read through this passage we see that Paul seems to be addressing a context of responding to enemies.
The church at this time, as it has much throughout history, was dealing with levels of persecution.
There were people that hated them and even took advantage of them because of their faith.
Paul is telling them to live a life without hypocrisy and of exemplary character, especially in front of unbelieving people that may increasingly be hostile and enemies of the Gospel.
People are watching.
Here is the question:

Are the people that make themselves enemies of God and the Gospel part of our mission field?
What should be our posture toward the hostile unbelieving world?

(18)  If it be possible, as much as lieth in you, live peaceably with all men.

This verse is quite clear.
There are times where peace between two parties is not possible.
Again, in this particular context the idea is that there may be times that living for Christ means that some people are against you.
But if peace is possible because of how we respond, then that kind of response is what we pursue.

(19)  Dearly beloved, avenge not yourselves…

When we are wronged, the natural desire is for us to seek revenge.
This may not seem as difficult when it’s something like getting made fun of on the playground, or called “holy joe” at work.
It may become more difficult when, like persecution that happened in the early church, someone’s loved one was killed for being a Christ follower.
Even within the context of persecution the correct response is not to repay evil back to the evil doer. We ought not to avenge.

We do not seek revenge.
We do not return evil in kind.
We reject revenge, because the lost world that wrongs us is our mission field.
Christ died for them.

But there is another reason.
Not only do we reject revenge, we also

The beginning of this sentence called for us to reject revenge, or “do not avenge for yourselves.
Paul then gives the alternative.
“But rather give place unto wrath”.
What does that mean?
Allow space for wrath.
Is this talking about our wrath?
I don’t believe that it is. He just got done telling us not to avenge ourselves.
There is a righteous kind of wrath that belongs to God.
God hates sin and will judge it.
When someone does wrong and they never seek forgiveness for it, they will pay for that sin themselves.
Jesus Christ died on the cross to pay for that sin. If they trust in Christ, that sin has been paid for and Jesus’ sacrifice has become a propitiation for sin- an appeasement of God’s wrath for their sin.
If they do not receive Jesus’ payment for sin, then they will become the object of God’s wrath. They will pay for the sin that they have done to you.
So to “give place to wrath” means to allow God to be the judge, jury, and executioner for that person.
Now we must have the heart of God. He is not willing that any should perish but that all should come to repentance.
Instead of having a heart of hatred toward the person that wrongs us, we should cling to that which is good. This means we should allow God to be the judge, and we should pray for their repentance and reconciliation with God and with us.
This is why Paul follows by quoting Deuteronomy 32:35 when he says:

for it is written, Vengeance is mine; I will repay, saith the Lord.”

There is only one who has the true right to vengeance.
Sin is first and foremost against God.
When we sin we sin against God.
David expressed this in Psalm 51 when he said, “Against thee and thee only have I sinned and done this evil in thy sight.”
All sin will be payed for. It has been paid for by Christ on the cross, or it will be paid for by people for eternity.
Ultimately, vengeance will be righteously and rightly executed. It is not up to us to individually do the work of God by exacting revenge on others.

Our desire for people should be to cling to what is good.
That means we should desire redemption and restoration with them and for them. We should reject evil thoughts and actions that we have toward them.
We should reject vengeance understanding that this is God’s work and not our own.

So if we reject revenge, and recognize that it is up to God to repay people with vengeance, what should our response to those who set themselves against us be?

Response #3- Repay Righteousness. (v.20-21)
(20)  Therefore if thine enemy hunger, feed him; if he thirst, give him drink: for in so doing thou shalt heap coals of fire on his head.

(21)  Be not overcome of evil, but overcome evil with good.
Explanation:

These are some amazing verses and really sum up what a transformed, renewed mind would think about something so difficult.
Paul says “therefore”. What does he mean?

for in so doing thou shalt heap coals of fire on his head.

In studying this I discovered that there was an ancient custom where someone who was contrite would show their public shame and contrition by carrying a pan of coals on their head.
The idea is that when we do good to those who have done evil to us it adds to their shame.
Now they are the only ones who have done evil, and in doing right towards them that becomes more and more apparent.
In sports I have seen it where one person hits another person, and then the athlete responds in kind and they are the one that gets penalized. The referees see the response when they may not have seen the initiating offense.  My dad used to tell me all the time, “Don’t talk son. Let your hustle, your developed skills, and the scoreboard do the talking.”  I hated that at times but now I am so thankful for his words.
Don’t be overcome by evil. Overcome evil.  How?  With good!

How many of you would agree that there is a lot of evil in our world?
We have been pretty good about recognizing certain evils?
We watch the news and shake our heads.
We see things on tv and sometimes recognize it as evil and shake our heads.
People do us wrong and we want to do wrong back to them.
But the way to deal with evil is not just to see it.
The way to deal with our enemies is not to be mean and angry and hostile back to them.
The way to overcome the evil is to do good.